Home » About Us » Articles » Gaited Horse Myths and Mendacities

Living in Montana among an overwhelming number of non-gaited horse owners has presented quite a challenge for several generations of my family.  The challenge hasn’t been in raising and training gaited horses to work along side their non-gaited cousins; it has been to enlighten those who don’t own them about how versatile they are.  We have repeatedly heard from these folks why gaited horses aren’t worthy of being ridden.  Here are just a few of those statements:

“Gaited horses only walk and can’t lope or canter.”

Every gaited horse I have ever known, and that is a considerable number and of different breeds, has cantered on its own.  The sequence of footfalls for the lope or canter is identical for gaited and non-gaited horses.  The only reasons I can think that this wouldn’t happen is due to injury or extreme age.  Injuries result from unfortunate accidental circumstances that are no fault to breeding.  Age is a different matter.  I never witnessed either of my great grandfather’s run, but I know they did before father time stole their get up and go.  It will happen to all of us sometime, whether we are a human or horse.

“They get their feet tangled up in brush.”

I have yet to find a gaited horse immobilized by pasture flora.  What I have experienced is moving through a piece of real estate covered in brush at a good running walk with no trail in sight;  the horse making great time and wheeling around the tall and through the shorter brush.  The only variation in movement was the occasional stutter step around Mama Natures’ obstacles.  When this stutter step occurs, it tells me the horse is watching where to plant his hoofs in the next steps.  I haven’t had to call a AAA wrecker or a Boy Scout troop with knot tying merit badges to untangle my transportation so far.  I’ll be sure to write of the experience if it happens.

“My Quarter Horse walks so fast your Tennessee Walker will be squeezing the dust out of his eye.”

This was said to me at a neighbors branding several years ago.   The neighbor had watched my horse cover a considerable distance at a running walk earlier that morning.  He had been quite impressed with the speed and smoothness of my mount and was pointing it out to the rest of the riders.  We were riding to another bunch of cows and calves to gather for more branding when one of the gentlemen who took exception to my neighbors’ statement made his claim.  I quickly pointed out the ironic part of the situation when I said, “yep, it looks like all these Quarter Horses are doing a fine job of out walking my horse with that jig they are doing.”  A good-natured chuckle rose from everyone whose horses were trotting to keep up with my even four beat gait; except for the fella whose foot was filling his mouth.

I guess my grandfathers and their horses didn’t know that either.  My mothers’ grandfathers and father and my fathers father all worked cattle on gaited horses.  These horses were an exceptional tool because of the long distances they needed to travel in order to get the work done.  Gaited horses overall are intelligent, have quiet dispositions and great stamina which suits work of this kind.  The cattle seem completely unaware that the horse is gaited and continue to act like cows in spite of that fact.  Gaited horses are like any other breed of horse, some have natural cow sense and some have to be taught.   As a trainer of gaited and non-gaited horses alike, I challenge the fellow who states his horse is “cow horse” bred.  I guarantee that if his “cow horse” never sees or smells cattle his entire life, then is ridden up to a cow in the middle of a pasture one day, the horse is going to do something other than get suddenly overwhelmed by a desire to chase the cow.  The horse is probably going to wonder, “what the heck is this thing that doesn’t smell or look like me?”  “Will it eat me?” “Will it maim me then eat me?”  “I’m not going to take any chances, I’m outta here!”   I have experienced this many times when training so called cow-bred horses.  One of the cowiest horses I’ve ever trained just happened to be a mustang.  So much for being “cow bred.”

“You can’t rope cattle from a gaited horse.” 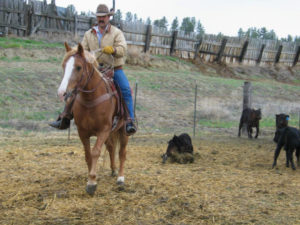 Remember the neighbor that had the branding?  That day, I heeled and drug to the branding fire somewhere in the neighborhood of two dozen calves.  This was on a Tennessee Walker gelding that had a total of 26 rides to his name.  I could have done more, but this was plenty for him to absorb at this stage of training.  Again, my ancestors have used these horses for all aspects of ranch work.  The horse doesn’t know he can’t be roped from.  The cow doesn’t know the horse has “roping neurosis”.  The only individual that knows the gaited horse can’t be roped from is the fella who hasn’t attempted it.
I vividly recall when I was a young boy, watching my grandfather rope a cow that needed doctoring several miles from home.  The cow was too sick to trail to the corrals and she would have needed to be roped to load into a trailer had one been available anyway.  Grandpa had packed a medicine kit in his saddlebags that day for this task, so it was just a matter of getting her doctored.  He wouldn’t allow me to help since I was too small to be of much use and he was afraid I would get hurt.  My job was to stay on my horse and stay out of the way.   Grandpa shook a loop out and approached the cow quietly.  The cow felt pressured enough she half-heartedly bolted so he urged his horse forward quickly and threw his loop.  He snagged her and let her reach the end of the rope that was tied hard and fast to the horn.  His horse was already backing up to keep tension in the rope.  With helpless awe, I watched that 60+ year-old cowboy and horseman complete a difficult job with only his horses’ assistance.  That afternoon I learned an invaluable lesson about how to accomplish necessary work regardless of the breed of a horse.

One of the things I have done for a living is spending 10 years as a Montana Game Warden.  I worked the wilderness areas of the Absaroka Beartooth Mountains quite a bit.  I patrolled around Yellowstone Park on more than a few occasions. This work entailed spending several days filled with long hours riding many miles of mountain trails to contact as many people as possible.  Often someone would want to come along for the experience with their non-gaited horse.  I looked at it as an opportunity to plant little seeds of respect for the breed.  I can’t tell you how many times those who thought their non-gaited horses could out work mine whistled a different tune before the end of the trip.  Usually they would have to trot their horse most of the way in order to keep up.  At that pace the fun quickly wore off!  Nearly every time this happened, there was much praise and admiration for their abilities in the mountains.  I have sold a number of horses to people in this manner and by meeting others in the mountains when they could see what a gaited horse can so deftly accomplish. 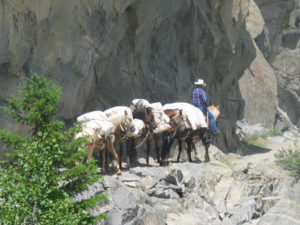 I have found that gaited horses actually carry a loaded packsaddle better than the typical non-gaited breeds because of their narrower build at the withers.  The packsaddle doesn’t roll as easy on their backs as it does on the more mutton shouldered breeds.  Even when traveling with a pack string, a couple more miles per hour can be expected.  This was a real plus when covering miles was the name of the game.   Of course the smooth gait helps keep the eggs from being prematurely scrambled.

“I rode a gaited horse once and it wasn’t any good.”

I once rode a tyrannosaurus into a grazing herd of unicorns.  Well… I’d like to see you prove I didn’t!

This comment is one of my favorites.  It is so often opinion based without experience and vague.  It is hard to argue because I don’t know the horse (if it happened).  I like to counter this statement with leading questions that allow the people to box themselves into a spot where their own bias discredits their statement.  Often they are so prejudiced toward a particular breed (usually the one they own) that they spew forth nonsense.  It becomes quite obvious that they either never rode a gaited horse or are stereotyping the breed because of one poor experience.  They aren’t open to learning anything about the virtues of gaited horses.  They just know it isn’t their chosen breed, so it can’t be worth a hoot.  I try to give them enough wiggle room in the conversation so they keep talking.  The more they talk, the more transparent their arguments become.  After a while they know I know they are full of road apples.  Hopefully this dampens their will to libel something they know so little about.

We have spent a considerable amount of time and effort over the years to promote the horses we raise and train, and promote gaited breeds we train for others.  The best way we have found to accomplish this is to train the horses well and let the individual horse be an ambassador for its breed through its actions.  It’s difficult for someone to argue about what a horse can’t do when they are watching it perform with their own eyes.

Because of these tactics, we are beginning to see a shift in the attitude of many non-gaited horse owners locally.  We know we are never going to convince everyone gaited horses are versatile and well worth owning if for nothing more than the smooth ride.  Of all the arguments I have heard over the years this last one makes me smile, because it places the gaited breeds in a whole different category of prejudice.  When a lady was asked what she knew about gaited horses, she said, “you don’t want one of those, they are way too expensive!”